Over the last few years, Christina Henry has found her way to becoming one of my favourite authors; I wait each year in anticipation for her novels and their spooky fairytale vibes. The Mermaid, which I believed was a Little Mermaid retelling was no different. Although this was very different to my expectations, it was never the less, another amazing novel.

I just want to thank Titan Books and Christina Henry for sending me a copy to review, it is always very much appreciated, especially when its a book I am so excited for. 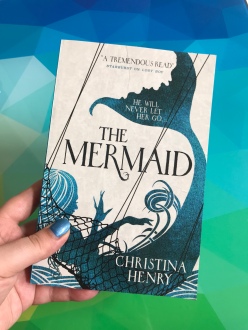 Once there was a mermaid who longed to know of more than her ocean home and her people. One day a fisherman trapped her in his net but couldn’t bear to keep her. But his eyes were lonely and caught her more surely than the net, and so she evoked a magic that allowed her to walk upon the shore. The mermaid, Amelia, became his wife, and they lived on a cliff above the ocean for ever so many years, until one day the fisherman rowed out to sea and did not return.

P. T. Barnum was looking for marvelous attractions for his American Museum, and he’d heard a rumor of a mermaid who lived on a cliff by the sea. He wanted to make his fortune, and an attraction like Amelia was just the ticket.

Amelia agreed to play the mermaid for Barnum, and she believes she can leave any time she likes. But Barnum has never given up a money-making scheme in his life, and he’s determined to hold on to his mermaid. (from Goodreads)

The thing I love about Christina Henry’s novels are the fact that the take some of my absolute favourite fairytales as a child, and twists them to show the spooky scary side of what could of happened. I always find I have to read her books in the day time with all the lights on and my dog snuggled at my feet; but I absolutely love it. This one was not quite like that.

I started this in the afternoon, prepared that I would probably struggle to sleep that night, but instead of scary this one had more of a morality vibe to it. Do not get me wrong, I still absolutely loved it, and finished this book in less than 24 hours, which is a record for me. It had me thinking about the classification of what we count as human, the treatment of animals and also of those that are unique. Admittedly this was more a thing in the past, but I definitely feel like there was something to be taken from this

Amelia was a character that you just found your heart reaching out too. She’d gone through such heartache, and knew that it was bound to happen again, I can appreciate this feeling. Having to decide what was worse, denying herself what her heart wanted, or knowing that it would all come apart in the end; I felt so sorry her, and wanted everything to be okay.

Im not too sure whether I would say it was closely linked to the Little Mermaid if Im honest, but you can definitely see the influence. Though then again I am only going from the Disney movie as I have not actually ever read the book- yes that is something I need to fix.

In the end, I gave this novel a four star rating. There was nothing wrong with it, I just didn’t love it as much as I have her previous novels, but this will be because I was expecting something different. I think I may need to reread it at some point. This novel is now available in the UK.

6 thoughts on “The Mermaid by Christina Henry”