Well the first quarter of the year has gone by, and I must say that it has done so WAY to quickly! I feel like, with study and life getting in the way, I have hardly managed any reading- which is very sad. However I have managed to make some progress on the 100 book list.

If you have not seen the reading challenge which I’m talking about, take a looksee here...

As I mentioned in the previous post, I was working my way through Dracula at the time that I set this challenge, and I can say that this is an excellent book. I was nervous about reading Classics due to the higher degree of difficulty with the language, but with both classics I’ve read this quarter, this has not been an issue. Admittedly it takes a few minutes of reading to sink into the novel and writing style, but then it became no different to any other writing.

Dracula though, was amazing once I got past the opening chapters. The book is

written from the perspective of several different characters, and in a mix of analogue and diary entries- which was a new form of writing for me. It was great to see the events from multiple points of view, from those outside and those effected. One or two of the characters did actually bore me,  but this was made up from the entries of others.

Jane Eyre is definitely my favourite from the list this quarter. Although a long read, it was again not all that hard, and actually rather gripping. I have written a full review of this that you can see here.  I am not normally a fan of romantic novels, which was a worry about this book for me; but was pleasantly surprised by the strength and independence that was portrayed within Jane. With most romance lines, I feel nothing, and am not fazed about how it turns

out, but with Jane and Rochester I found myself feeling that the book would be incomplete if they did not end up together.

The final book, I am ashamed to say that I have not read until now, and that is Harry Potter and the Philosopher’s stone. I had planned to start this series that is on the list, early on in the challenge- which was pushed sooner through the advice of a 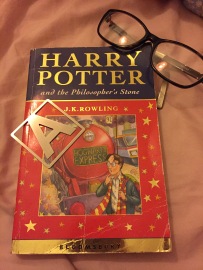 friend. Was a nice relief to read such a gripping, yet simple to read book; I found myself being unable to put it down despite the fact that I already knew what was going to happen. The fact that it is such a short book, yet is jam-packed with story is amazing; normally short books frustrate me due to the lack of world-building and story development; but this novel did not do this! Will be getting to the rest of the series very soon; who knows I may finish this one within the year.

In total I read 9 books this quarter which is not bad, but would of preferred to be further along with my 50 book challenge. But I am determined, and have plenty of books to read, so this is definitely still a do-able goal.