So I may of had a bit of a two week break, but I am back, and have the exciting privilege of sharing an extract from a new release from Titan and Rio Youers, Halcyon. I am very excited to pick this one up, and I think that after reading this you will be too. So continue reading to get a sample of this spooky new release, and make sure to catch the rest of the stops on this tour.. 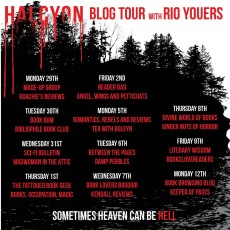 We might have stopped it,” Laura said. “Don’t say that.”

“Yes, but we could have—should have—put the pieces together.” Laura stood up from the kitchen table. She made a frantic gesture with her hands, as if she wanted to grab something but couldn’t, then exhaled and shook her head. “Jesus, I haven’t slept much these past few nights.”

Martin went to her. He circled her waist with one arm, stroked her hair, the same color—honey gold—as the day they’d met, just as full of body and bounce, and not a shimmer of gray. She looked at him with what he called her flashlight expression: illuminating, but searching. It didn’t ask, How can you make this right? but rather, How can we make this right? We. Together. Every knot they’d untangled in their seventeen years of marriage, they’d untangled together.

“This isn’t ours to carry,” Martin said firmly. “It’s not like we had credible intel and chose to ignore it. We’re talking about an implausible event—a possible psychic occurrence.”

“What can I say? I’m a rational man.” Martin tapped one finger to his skull. “I’m still struggling to make sense of this.” “You saw it with your own eyes,” Laura said. “Forget the premonition, or possible premonition. Something happened between Edith and Shirley. A connection. A communication.

And honey, it wasn’t normal.”

“We thought it was coincidence.” He took her hand and steadied it; she was making grabbing motions again. “We thought they’d watched the same shit on YouTube, or wherever, and it caused Shirley to have a seizure, and Edith to have a night terror. We could never have known it was more than that.”

“Yeah. Sure. Call it what you want.” Martin brought Laura’s trembling hand to his lips and kissed her fingers. “It was crazy shit, and it went beyond rational thinking.”

“We can’t beat ourselves up for what happened, Laura.” Martin’s expression was more lead blanket than flashlight: serious and unwavering. “ That way lies madness.”