Now if you’ve read my most anticipated book releases of 2019 you will know that this was a feature on that post, and I’ve had the great pleasure of getting to read it early and now share my thoughts.

After the death of her sister, seventeen-year-old Violet Saunders finds herself dragged to Four Paths, New York. Violet may be a newcomer, but she soon learns her mother isn’t: They belong to one of the revered founding families of the town, where stone bells hang above every doorway and danger lurks in the depths of the woods.

Justin Hawthorne’s bloodline has protected Four Paths for generations from the Gray—a lifeless dimension that imprisons a brutal monster. After Justin fails to inherit his family’s powers, his mother is determined to keep this humiliation a secret. But Justin can’t let go of the future he was promised and the town he swore to protect.

Ever since Harper Carlisle lost her hand to an accident that left her stranded in the Gray for days, she has vowed revenge on the person who abandoned her: Justin Hawthorne. There are ripples of dissent in Four Paths, and Harper seizes an opportunity to take down the Hawthornes and change her destiny-to what extent, even she doesn’t yet know.

The Gray is growing stronger every day, and its victims are piling up. When Violet accidentally unleashes the monster, all three must band together with the other Founders to unearth the dark truths behind their families’ abilities—before the Gray devours them all. 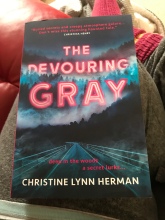 This book turned out to be a solid three out of five star read for me, which as you can probably guess was not as high as I had been expecting, however in many ways I still loved this novel.

I felt like this left me wanting to know so much more about Harper and the full extent of her power. Although it does finally get touched on, its just not enough in my eyes. I feel that so much more could be made the back story to many of the characters to be fair, but Harper was definitely the one the peaked my interest the most.

However that being said, this is the first in a series- although I don’t know how many books are going to be involved in the series- and this definitely sets the series up to be amazing. This book gives you a good understanding of the world setting, and a nice introduction to the characters. It touches on what they are up against, but it certainly does not give anything away.

I found this to be a very fast paced quick read, that I flew through in just a few days, and was constantly wanting to pick it back up. That is definitely the making of a good book.

So although The Devouring Gray was only a three star read to me, I am definitely anticipating the sequel to be a four or five star read. It just holds so much potential, that I feel its been left at a place where the next book should be able to just take off into the action.

This releases in April this year, so I highly recommend you get it pre-ordered!

3 thoughts on “The Devouring Gray by Christine Lynn Herman”