Well I broke my only buy once a month rule.. Brought the first 5 in the Waterstones sale; the same day as picking up 4 from the library.. OOPS..

Then Amazon did a 3 for £10 on books.. Finally I found the biggest bookstore in Europe, adding final 3 to the pile… Plus one that was gifted to me… This is going to be a long list… 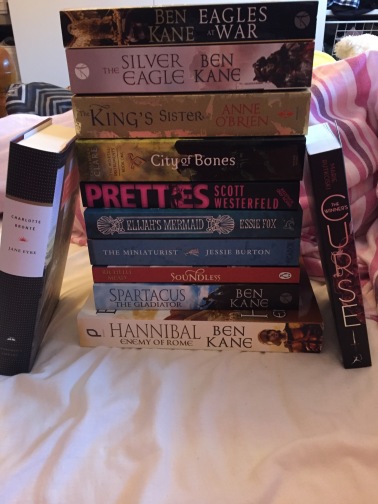 Recommended on Goodreads, I was curious about this one; looking at hiring it from the library. But when I then saw the Waterstones sale, it was in their for half price, making it an obvious buy!

‘They were never meant to be together. As a general’s daughter, seventeen-year-old Kestrel enjoys an extravagant and privileged life. Arin has nothing but the clothes on his back. Then Kestrel makes an impulsive decision that binds Arin to her. Though they try to fight it, they can’t help but fall in love. In order to be together, they must betray their people . . . but to be loyal to their country, they must betray each other.’

‘Betrayed to the Romans by his jealous king, Spartacus – and with him Ariadne – are taken in captivity to the gladiator school at Capua. It is from here – against the unbelievable brutality of gladiatorial life – that Spartacus and Crixus the Gaul plan their escape to Vesuvius, where they recruit and train a huge slave army. An army which will keep the might of Rome at bay for two years and create one of the most extraordinary legends in history.’

This was the second of the two Ben Kane books that I got this month, and it is a very big book- always love books that are bigger due to the bigger font. My latest favourite genre is definitely that of gladiators in ancient Rome or Greece, with Ben Kane being my preferred author.

‘The great Carthaginian general, Hannibal, has never forgotten the defeat and humiliation of his people by Rome. Now he plans his revenge and the destruction of the old enemy. While Hannibal prepares for war, Hanno, the son of one of his most trusted military commanders goes out fishing with Suni, his best friend ― and is washed out to sea. Captured by pirates, transported to an Italian slave market, one of the boys is sold as a gladiator, the other as a field slave. Both believe that they will never see home or family again.’

If you’ve read any books of this genre, please let me know some recommendations, and/or thoughts on these books?

I have to admit I didn’t even know that this was out- but I love Richelle, reading the VA and Bloodlines series many times, so was an obvious buy (even better as was just £4!!).

‘For as long as Fei can remember, there has been no sound in her village, where rocky terrain and frequent avalanches prevent residents from self-sustaining. Fei and her people are at the mercy of a zipline that carries food up the treacherous cliffs from Beiguo, a mysterious faraway kingdom.’

Very excited for this one, can see it being a single day read. If you’ve read it, please let me know what you thought..

This was a little treat from my parents for after my surgery last week. I’ve never read anything like this, but I am trying to venture out and try different things. I am actually very excited for it, I like the history of the Victorian era, so looking forward to trying some fiction within that genre.

‘It begins with the story of Pearl – a web-toed child who is found half drowned and floating in the Thames one night. When taken to live in a brothel, the girl is protected and pampered until she approaches puberty and suddenly comes to realise that she will soon be auctioned off to the highest bidder.’

The Miniaturist was recommended to me by a family friend who claims to not of been able to get out of the book while on holiday- plus it was then in the Waterstones sale for £3! Absolute bargain. This is a continue of my challenge of trying other genres that is mentioned above – but specifically I love the idea of a story following a poorer female within historical genre, as much of what I read follows male or rich female leads.

‘On an autumn day in 1686, eighteen-year-old Nella Oortman knocks at the door of a grand house in the wealthiest quarter of Amsterdam. She has come from the country to begin a new life as the wife of illustrious merchant trader Johannes Brandt, but instead she is met by his sharp-tongued sister, Marin. Only later does Johannes appear and present her with an extraordinary wedding gift: a cabinet-sized replica of their home. It is to be furnished by an elusive miniaturist, whose tiny creations mirror their real-life counterparts in unexpected ways . . .’

I will do a separate review of this and ‘Elijah’s  Mermaid’ as a varying genre for me. This review will look at the two books, as well as possible other genres I may try. (Probably won’t be until the new year).

After recommendation I read Uglies last month and flew through it. Though not particularly unique it was gripping, with some very interesting characters which made me want to read the sequel, so grabbed it in the Amazon sales

‘Tally has finally become Pretty. Now her looks are beyond perfect, her clothes are cool, her boyfriend is totally gorgeous, and she’s completely popular. It’s everything she’s ever wanted.
But beneath all the fun – the non-stop parties, the high-tech luxury, the total freedom – is the nagging sense that something is very wrong. Something important. Then a message from Tally’s Ugly past arrives. Reading it, Tally remembers what’s wrong with Pretty life, and the fun stops cold. Now she has to choose between fighting to forget what she knows and fighting for her life…’

I’m so excited for this one, and am sure I’ll be getting the third book pretty quickly after.

I’ve been told to read this by the same person who recommended Uglies, and after enjoying that one so much I thought I may as well try this too. I love the sound of this one, as it seems to have a bit of a different story line to other YA fiction that I’ve read, which will be great.

‘When fifteen-year-old Clary Fray heads out to the Pandemonium Club in New York City, she hardly expects to witness a murder—much less a murder committed by three teenagers covered with strange tattoos and brandishing bizarre weapons. Then the body disappears into thin air. It’s hard to call the police when the murderers are invisible to everyone else and when there is nothing—not even a smear of blood—to show that a boy has died. Or was he a boy?’

I’ve managed to avoid the film of this book luckily, so I’m hoping to be able to get into this series and then watch the film. Can’t stand seeing films before I’ve read the books

I love historical fiction based in the Tudor era, reading a lot of Philippa Gregory and Elizabeth Chadwick, and with almost reading all of Gregory’s books, it felt about time to branch out to other authors.

‘1382. Daughter of John of Gaunt, sister to the future King Henry IV, Elizabeth of Lancaster has learned the shrewd tricks of the court from England’s most powerful men. In a time of political turmoil, allegiance to family is everything. A Plantagenet princess should never defy her father’s wishes. Yet headstrong Elizabeth refuses to bow to the fate of a strategic marriage. Rejecting her duty, Elizabeth weds the charming and ruthlessly ambitious Sir John Holland: Duke of Exeter, half-brother to King Richard II and the one man she has always wanted.’

Have to admit I have not got overly excited about this one since buying it, but it worked out free in the Amazon sale. Will definitely be giving it a go and will let you know how I get on

This is the sequel to The Forgotten Legion which I absolutely ADORED!! SO SO excited for this one, and to be fair, for all of Ben Kane’s books. His writing has given me a real book hangover, which I can see only another of his books solving.

‘Now Brennus the Gaul, Tarquinius the Etruscan soothsayer and Romulus, bastard son of a Roman nobleman, are prisoners of Parthia. They dream of escape, but in the brutal fighting which lies ahead, only two will survive.

Meanwhile, Fabiola, Romulus’s twin sister, is caught up in the vicious eddies of Roman politics. Hunted by slave catchers she flees, hoping to find her lover, Brutus, bound for Alexandria with Caesar.’

‘AD 9, German frontier: Close to the Rhine, a Roman centurion, Lucius Tullus, prepares to take his soldiers on patrol. On the opposite side of the river, German tribes are resentful of the harsh taxes about to be imposed upon them. Suspicious that there might be unrest, Tullus knows that his men’s survival will be determined not just by their training and discipline, but by his leadership.’

After Christmas I will be buying all of Ben Kane’s books, as I have fallen head over heals for this author. Seems like such a long wait though!

As a child I had the shorter teenage versions of both this and Wuthering Heights, but this was always my favourite. Had never really thought about reading the longer version until I found this gorgeous version of the book, with a hard back cover, and a ribbon in the centre.

‘Although the poor but plucky heroine is outwardly of plain appearance, she possesses an indomitable spirit, a sharp wit and great courage.She is forced to battle against the exigencies of a cruel guardian, a harsh employer and a rigid social order. All of which circumscribe her life and position when she becomes governess to the daughter of the mysterious, sardonic and attractive Mr Rochester.’

This will be read as part of one of my 2016 reading Challenges which you can read about later on, at the start of the New Year.