When I came up with the idea of doing this post I had in mind for it to be an informational post that could help those of you who have male Gerbils. However my two little devils have decided to start confusing me by switching who is the most dominant.

When I adopted my two little boys, I was told what to look out for as signs of dominance. These were: first to the food, using the nest the other has made, and climbing on top of the other. My digger was always the dominant one from a very young age; and in some aspects he still is. He knows when the new food is put out and will sit right next to the bowl before I do it, to then permanently sit in the bowl until all the ‘good’ food has gone. With this being said Drip does get to the food, but just later- luckily he isn’t as food orientated anyway.

From about 2 and half months old, Digger ‘became a man’, 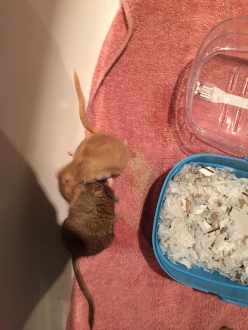 and would constantly be running around trying to mate with Drip, and this has not changed. This was the very first sign I had that Digger was going to be the dominant male. Though this has not changed, Drip does now do the same back, something, if they followed the classic dominant rules he shouldn’t do. This would suggest that they are both dominant which is odd, but kinda cute.

Another sign of dominance in Gerbils is who makes the nest. The nest should be made be the ‘female’ or in my boys case, the less dominant. This used to be the case with my two, Drip would always make the nest, fluffing it right up, and making it snuggly. I have to admit that this was actually a very early one that  my boys stopped doing. Digger is always the rest to get tired since we learned about Drip’s allergies and corrected his food, so more often than not, he will be the one to go to the nesting spot and make it right for the night ahead. This I must say I am glad off, it is nice to see that they both just do what they want and not necessarily wait for the other- though they are very caring of each other.

The final thing I want to mention was actually something I had to look up as it seemed like unusual behaviour. Drip, my lighter boy, very quickly started standing still, hitting his paw against the ground. I looked it up, and found its a behaviour called ‘thumping’- its a warning signal to other gerbils that there might be danger around. As a baby, and when he was ill, he did it daily; luckily he has now grown out of it. When researching though I found that it is a dominant trait, as its them trying to protect the females and young that are in their families.

So as you can see, my boys do not fit nicely into the obvious dominant     category, but rather they are both unique and protect each other. I call them my little rascals but in truth they are very lovely little creatures, with wonderful personalities.