Ben Kane is one of those authors that I constantly rave about. Although I have not finished reading all his books, I am yet to find one that I have been able to either put down or not love- and this one was no different. I had this book pre-ordered so that I got it the morning of the release day, and that was still not soon enough for my liking!This was the second of the Eagles series, and is set five years after the ending of ‘Eagles of War’. It follows a selection of the previous characters including Tullus and Piso, as they return to Germania, and begin to try and take back control over the tribes. And of course, find their lost Eagle standards. 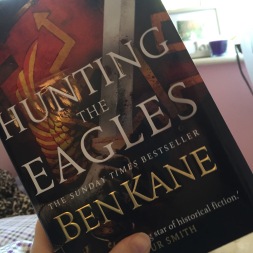 Piso was a favourite of mine in the first book, the close knit relationship between him and his tent mates fascinated me. I’ve studied the Romans and I never once imagined the close bond they would form living and fighting together- naive I know- and this was an element to the story that therefore really gripped me. Its a relatively small element to the story, however it is an eye-opener that allows you to understand the emotional effect that the events of both novels would of had on the shoulders. So much so, that when Piso loses his last remaining original tent mate, I almost cried. His heartfelt reaction, carrying the body in the heat, it gave a completely different feel to the end of the book compared to the rest.

Throughout the story, you saw Tullus’s struggle of being out-ranked by those younger than him- and also often very arrogant. In ‘Eagles at War’ you saw how hard Tullus fought to help him legion, and the struggles he was put through with each life lost; yet five years later he is treated as a failure for the lose of his Eagle, rather than holding him up for saving the most men from the forest attack. I honestly felt so sorry for him, losing his eagle that meant so much to him, having been ignored by his superior when he became aware of the previous risks; and now having to battle to prove his worth as a leader. But yet once again, he was proven to be the smarter of the leader, being able to lead his men and rescue those who have walked into dangers.

In this novel you saw a much more sensitive side to Tullus, between the young girl he rescued, saving his slaves family, and searching for his previous legion’s bodies, you just couldn’t help but connect with him, and feel pity for his situation. But Kane also makes you honour Tullus, the strength he shows at walking back to the scene of the battle, and choosing to fight against Arminius again.

This book was full of wonderful characters that you were able to get to know, and understand on various levels- both of good and bad character, but the one thing that stands out with all the characters is a sense of honour. They all believe they are doing the best for their people, and are willing to do everything the can to protect those and their cause. In this sense, there is not a ‘villain’ that you can want to fall, no one you wish would be killed off; instead you root for them all in various ways. When Arminius loses his wife, I longed for him to find her again due to the true sense of sorrow that I felt from his reaction; yet I love the men within the Roman Army and would not want to see Piso or Tullus fall.

Rating this book is very straight forward. Although, for me, it was a little slow to start, I have to rate this book 5/5, as I could not put it down, and am already eagerly awaiting the next instalment. For any fans of either Roman fiction, or battle fiction, I would have to recommend this book; for all its violence it has a heart felt emotion that matches- not something you would necessarily expect.

One thought on “‘Hunting the Eagles’ by Ben Kane”