I contemplated not doing a life update this month as I feel that it is going to be a rather negative one. Actually I think I only have about two positive highlights. But, ultimately, I did say that I was going to do monthly updates, and this just shows the true ups and downs of life with mental and physical health issues. So here we go, this is how my month of February has been…

I’ll start with the obvious that I have talked about a lot on Twitter and previous blog post; I have been diagnosed with Glandular Fever. So because of that I cancelled a trip to visit a friend, my birthday trip to Disney land, and turned down a great media opportunity for Mind. All my fun plans for the most part of the month has been replaced with bed rest and lots of sleeping. Since being diagnosed, some of my symptoms have been worsening, causing me to fall a lot when trying to walk, and I now seem unable to stay awake for an entire day. I am definitely in for a bumpy ride with this recovery, as it can take several months.

This month has seen the house move, move forward quite a lot. We had photos taken and the environmental inspection all done; and as the theme of this post, it was a lot more difficult with being ill. My house was definitely not in a fit state for the photos at the start of the month, what with having only half the possessions in it that were meant to be; so a big organisation day was necessary. It was so exhausting, with being ill it meant I had to sit down and just help by saying where to put stuff; but it was surprisingly stressful and emotionally exhausting- plus it took two days! Unsurprisingly it then took several days to recover. But we got it looking amazing and have started getting requests for viewings.

Lets move swiftly onto the positives.

Before we found out how ill I am, I went for a great day out in London with my Dad. Tried a delicious BBQ restaurant that we’d been recommended, that proved that when food is really good, I can eat a whole lot more than I probably should. For once we didn’t even look at the desert menu because the mains meal was just so big!! Then to top it off, we went to Waterstones Piccadilly- just my favourite bookshop ever! Luckily I hadn’t been on a actual bookshop shopping trip for a little while, so I went big and spoilt myself, just as you do. However exhausting (made worse by not knowing why it was so exhausting) it was a fabulous day, and was nice to spend some quality time with my day- and not to mention that I got some really exciting books. 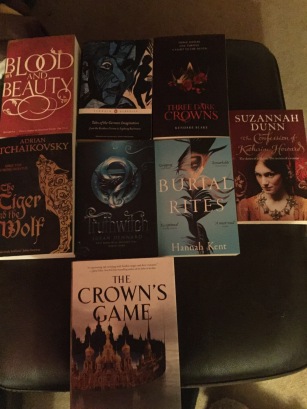 Finally, I’m going to put these next two together, as they were both quite minor but actually they meant a lot to me. I got spoilt on Valentines, as was meant to be going to my favourite Chinese restaurant up where my boyfriend lives, but I’m currently not well enough to go to his place currently, so instead he brought the food to me. For those that are thinking that its minor, you need to understand that me and my boyfriend live almost an hours drive apart, so it was really special for him to of thought through getting the food here for our dinner. Then lastly, on the 26th, it was a year since my first date with my boyfriend; we didn’t really do anything for it, but its just a nice milestone to mention- especially as neither of us actually thought that we’d get through to a year.

So that is pretty much my February in a nut-shell. For the bits in between I was pretty much just in bed or on the sofa with my book. Here’s to hoping that my health starts to improve and I can do some more fun things to tell you about next month; its definitely more promising as I have my birthday!! What has your month been like?

One thought on “February Life Update”