Welcome to day one of the Burned and Broken virtual book tour, its such an honour to be able to be part of this. When I read the press release for this novel, I was immediately sucked into the of Donna’s story, as well as the fact it is based in Southend- a place I visited a lot through my childhood. This book actually surprised me at just how engrossed I became in it, not wanting to put it down pretty much from the time I started it. 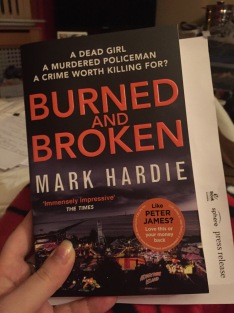 Based in Southend-on-sea, with the sea as a backdrop, two crimes are being investigated. A policeman, already subject to internal investigations, is discovered burnt to death in his own car in a car park on the seafront. A young impressionable girl, just out of the care system, grieving for the lose of her best friend, is determined to discover the truth of what happened. With one case closed, and the other fresh under investigation, the police having to revisit the old to solve the new.

I cant say that I have overly much to say for this gripping novel, with all its twists and turns, it had me constantly changing my opinions on characters and who I thought was to blame. This just had me loving it more; with each chapter  understanding and sympathy grew for the characters, those I started not overly liking grew on me to the point of willing them on, and everyone came out of it okay. From the outset I got a connection with Donna, her hallucinations had me sympathising even when she wasn’t so honourable, and as a Schizophrenic myself, I have to say this was one of the best examples of psychosis in writing that I have read for a long time, possibly ever.

Police crime I cant say is my favourite genre, and I did find I had a similar issue with this that I have with other examples. With the exception of Cat Russell, I was getting the other  characters mixed up between the names- this is something that does normally put me off of police fiction, but with this the difference was that once the characters started talking I could instantly distinguish them again, making it only a problem when characters referred to others by police title and position.

Overall this was an edge of your seat, gripping, thrilling novel which had me turning page after page without breaking for anything. I gave it 4 out 5 stars in the end, but do not be put off by the loss of a star. If you want a quick, suspenseful read that will throw you off of the trail of the culprit with each chapter then this is the read for you. I can not wait for the next books following these police officers in this gorgeously perfect setting.