It’s so exciting that I’m getting to write this post, as there has been times this year where I didn’t think we would get to this point; but I have officially had the pleasure of calling my little boys mine for three whole years. Okay so this may seem like a very little thing, but my gerbils are my fur babies and mean an awful lot to me. At the full age of three, my babies are starting to get a little old, and its been touch and go at times whether or not Drip was able to keep going; but he has, and my boys are both so healthy and doing well now.

So on the 12th of October my tiny gerbils are the grand old age of three; though I’m confident that they both have another year if not more in them now that they seem to of settled into the new house and doing so well in their new bigger flat cage. Then today (22nd of November), is three years to the day that I went and collected these two teeny tiny little fluff balls, one crazy and energetic, the other so cuddly and docile.

I have written about these little boys in the past, and explained about Drip’s health issues, and this year has been another tough one. With a stroke very early on in the year it wasn’t a good start but he recovered completely from that like the little trooper that he is. Then after the stress of moving them, and then having to stay in three different houses over the course of a week, Drip had the worst turn he has ever had. With three different vet trips, two suggestions to have him put down, and then finally a whole bunch of different medication he pulled through. It is now thought he has a brain tumour, which is causing seizures; however he is only having one every 2 months or so, so he definitely has life in him yet. Although now slightly lopsided, the little guy back to being his happy cheeky self. 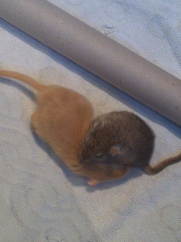 After Drip’s turn with his brain tumour, we’ve had to make adaptions. They now live in a all one level cage which is a lot bigger than their old one; this stops the risk of Drip falling as he was doing that a lot in their old one which was quite dangerous. They also only have ‘soft’ toys on the ground, and their tough ones hanging higher up. Oddly enough this is actually for Digger, as for once he had to have a vet trip all of his own!

Digger, my solid little man, has repeatedly managed to cut his stomach and scent gland. With days of salt baths and antibiotics, it would just start to heal and then he’d manage to knock the scab and have to start all over again. Now that it is a constant sensitive area we have had to make it impossible for him to be able to climb all over wood or solid materials that could cause it to reopen.

However my little man, Digger is going strong and is my little cuddle buddy; definitely the more social of the two nowadays and loves to be carried around to explore. The specialist vet that treated Drip has even said that Digger is the healthiest and friendliest gerbil that he has seen and is sure that he will surpass the normal 5 years age expectancy.

So happy to still have my babies 3 years on, they really are very special to me; I talk to them constantly and have daily cuddles- after all who could resist. That’s it for a little gerbil antics update, I’ll be sure to do another sooner than the year its taken for this one!

What little fur babies do you have?

3 thoughts on “3 Years with my BabyBoys”